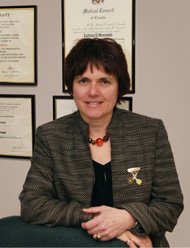 Born in Montreal, Dr. Letitia Muresan (M.Eng., M.D., FRCP(C), CSPQ) studied engineering before becoming a doctor. She received her Masters degree in Engineering from McGill University in 1981. From 1981 to 1983, she served as research scientist at MIT working in the field of satellite antennas.

By 1983 Dr. Muresan was enrolled in the Faculty of Medicine at the University of Montreal. During the course of her studies, Dr. Muresan applied her engineering skills to the medical field while at the Montreal Neurological Institute as a Research Engineer (IRM) before finally earning her Doctorate in 1988.

That same year Dr. Muresan began her internship (internal medicine) at the Montreal General Hospital, and completed her Residency in neurology back at McGill over the next five years (1989 to 1994).

An accomplished physician, Dr. Muresan is a Fellow of the Royal College of Specialist Physicians Canada, and holds a Specialist Certificate in neurology (College des Medecins du Quebec). Her professional experience spans over fifteen years, beginning in 1995 when she was appointed Neurologist at the Centre hospitalier Saint Joseph de Lachine (November 1995 to December 2006). She held the same post, concurrently, at the Lakeshore General Hospital (June 1995 to February 2009).

Dr. Muresan holds several prestigious professional affiliations, including: the American Academy of Neurology; the Ontario College of Physicians; the Canadian Stroke Consortium; the California Licensing Board; the Quebec Medical Association, and the Associations des neurologues du Quebec. She also sat on the Medical Ethics Committee at the Lakeshore General Hospital (1997 to 2004).

A published professional with wide-ranging clinical research experience, Dr. Muresan is a respected and recognized member of her profession. She is a loving mother to four children and enjoys spending time with her family every chance she gets.